It was lights, camera and action for over 200 teenagers who took part in an important engagement project to tackle youth annoyance and anti-social behaviour. 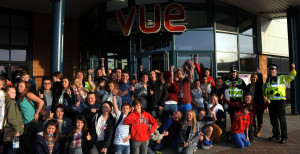 An entire cinema was taken over for the evening to mark the end of the Youth Engagement Project, to encourage young people to continue to make the right choices about how they spend their time, as well as showcasing other support services on offer.

The event was made possible thanks to a joint effort from partner agencies across Rhondda Cynon Taf and Merthyr Tydfil, funded by the Welsh Government’s Youth Crime Prevention Fund.

Youth annoyance and anti-social behaviour remains a top concern for communities in both county boroughs, with agencies including South Wales Police, Rhondda Cynon Taf and Merthyr Tydfil Councils dealing with numerous reports and complaints from residents each year.

As important as taking robust action against the minority who do cause harm to our communities with their behaviour, is ensuring there is information, engagement and provision on hand to enable young people to make the right choices in the first place, thereby preventing and reducing crime and disorder.

As well as tackling those causing problems – including seizing alcohol, returning them to their parents and making anti-social behaviour referrals – the important scheme also engaged with nearly 500 12 to 17-year-olds.

Officers spoke with the young people about how they spend their spare time, working with them so they understood how “hanging around” could be seen by others to be anti-social or disruptive.

They also undertook a survey of young people to find out how they would like to spend their spare time, with the cinema coming out as the top activity for the weekend.

Cllr Paul Cannon QPM, Chair of Rhondda Cynon Taf Community Safety Partnership, said: “This is an important project that builds on the extensive work partner agencies have delivered across Merthyr Tydfil and Rhondda Cynon Taf in recent years to respond to concerns and complaints about anti-social behaviour.

“It is vital that we not only tackle this priority issue by dealing with offenders and those causing harm, but also prevent it from happening in the future by engaging with young people, educating them on the potential impact of their behaviour and ensuring they have access to the services and activities they need.”

Cllr Brendan Toomey, Leader of Merthyr Tydfil County Borough Council and Cabinet Member for Community Safety, said: “This operation was about engaging with young people, so we could not only tackle anti-social behaviour, but prevent it by promoting positive ways young people could spend their social time.

“The cinema came out as the top activity young people would like to enjoy at the weekend. So we took the opportunity to deliver what they wanted to mark the end of the project. As well as enjoying a film on a Friday night, there were also stands in the cinema with information and support on a range of issues affecting young people so we could further engage them.

“This work will continue across both county boroughs and we urge communities and young people who are affected by anti-social behaviour, or want to find out more, to contact the team.”